Madonna and Child with John Baptist

Giovanni Baglione was one of the most important protagonists of the Roman scene at the beginning of the seventeenth century. Born between 1566 and 1568, he trained first in the workshop of Francesco Morelli, where he began as a mannerist painter and a decorator. His first works are linked to the great renovation sites of the Roman monuments of Pope Sixtus V. Together with a host of painters (such as Giuseppe Guerra, Cesare Nebbia, Andrea Lilio, and the Conti brothers), he worked on the Scala Santa in the Lateran Palace, the Vatican, and in the Sistine Chapel of Santa Maria Maggiore. In those years, Baglione met the Cavalier d`Arpino, with whom he worked between 1599 and 1600. The Virgin is seated, wearing a rich red robe covered by a cloak and pink veil. Baby Jesus is standing on her lap, with curly blond hair framing the face with a red complexion. The little Christ holds out his hands to the young John the Baptist, also standing near Mary`s leg, who prays to his cousin with hands joined. Below, in the foreground, there is the head of a lamb, an iconographic attribute to the Baptist. The painting has recently been restored and today enjoys a state of conservation that appears excellent, so much so that you can read all the details; from the transparencies of the veils of the Madonna and the light dress of Jesus, to the hair that is painted strand by strand with a frothy, and very elegant material. 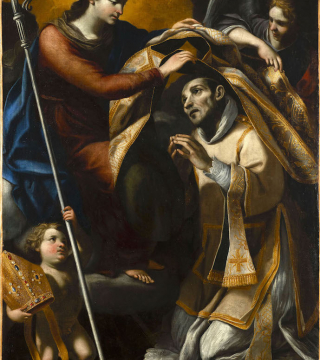 Lombardian Master, Saint Ildefonso Receiving the Chasuble from the Virgin 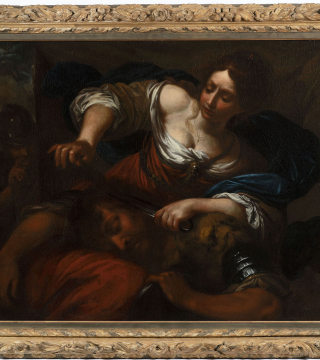 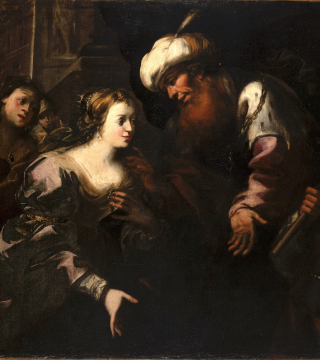 Meeting between Solomon and the Queen of Sheba